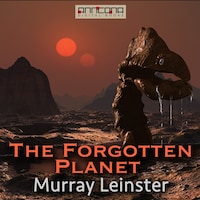 The Forgotten Planet is a science fiction novel by Murray Leinster first published in 1954.

The ”forgotten” planet had been seeded for life, first with microbes and later with plants and insects.

A third expedition, intended to complete the seeding with animals, never occurred.

Over the millennia the insects and plants grew to gigantic sizes.

The action of the novel describes the fight for survival by descendants of a crashed spaceship as they battle wolf-sized ants, flies the size of chickens, and gigantic flying wasps.

NATURE'S MISLEAD MADHOUSE!  Beneath dense gray clouds through which no sun shone lay a forgotten planet. It was a nightmare world of grotesque and terrifying animal-plant life. Gigantic beetles, spiders, bugs and ants filled the putrid, musty earth—ready to kill and devour anything in sight.

There were men amidst this horror—men who cringed and ran from the ravening monsters and huddled in the mushroom forests at night.

Burl was one of these creatures. But one day inspiration hit Burl. He would find a weapon—he would fight back.

And with this idea the first step was taken in man's most desperate flight for freedom in this most horrible of all worlds. But it was only a first step.