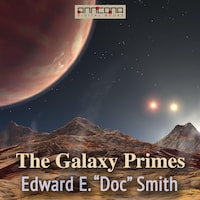 The Galaxy Primes is a science fiction novel and space opera by American author E. E. ”Doc” Smith. It was first published in 1959.

They were four of the greatest minds in the Universe: Two men, two women, lost in an experimental spaceship billions of parsecs from home.

And as they mentally charted the Cosmos to find their way back to earth, their own loves and hates were as startling as the worlds they encountered.

The Galaxy Primes was first seriliazed in Amazing Stories and published in March, April and May 1959.