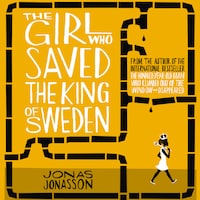 The Girl Who Saved the King of Sweden

Just because the world ignores you, doesn’t mean you can’t save it . . .

Nombeko Mayeki was never meant to be a hero. Born in a Soweto shack, she seemed destined for a short, hard life. But now she is on the run from the world ‘s most ruthless secret service, with three Chinese sisters, twins who are officially one person and an elderly potato farmer. Oh, and the fate of the King of Sweden - and the world - rests on her shoulders.

As uproariously funny as Jonas Jonasson’s bestselling debut, this is an entrancing tale of luck, love and international relations.

‘A comic delight of love, luck and mathematics’ Daily Express