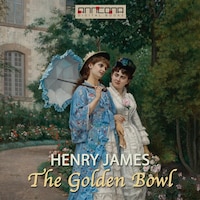 The Golden Bowl is a 1904 novel by Henry James.

Set in England, this complex, intense study of marriage and adultery completes what some critics have called the ”major phase” of James' career.

The Golden Bowl explores the tangle of interrelationships between a father and daughter and their respective spouses.

The novel focuses deeply and almost exclusively on the consciousness of the central characters, with sometimes obsessive detail but also with powerful insight.

Prince Amerigo, an impoverished but charismatic Italian nobleman, is in London for his marriage to Maggie Verver, only child of the widower Adam Verver, the fabulously wealthy American financier and art collector.

While there, he re-encounters Charlotte Stant, another young American and a former mistress from his days in Rome. Charlotte is not wealthy, which is one reason they did not marry. Maggie and Charlotte have been dear friends since childhood, although Maggie doesn't know of Charlotte and Amerigo's past relationship…

In 1998, the Modern Library ranked The Golden Bowl 32nd on its list of the 100 best English-language novels of the 20th century.