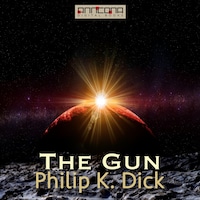 The Gun is a science fiction short story by Philip K. Dick, first published in 1952.

Nothing moved or stirred. Everything was silent, dead.

Only the gun showed signs of life ... and the trespassers had wrecked that for all time.

The return journey to pick up the treasure would be a cinch ... they smiled.

The Gun was first published in Planet Stories September 1952.