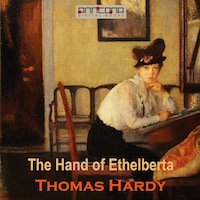 The Hand of Ethelberta: A Comedy in Chapters is a novel by English writer Thomas Hardy first published in 1876. It was written, in serial form, for the Cornhill Magazine.

Ethelberta was raised in humble circumstances but became a governess and consequently, at the age of 18, married well. However, her husband died two weeks after the wedding.

Her father-in-law, Lord Petherwin, died shortly afterwards. Ethelberta (now 21) lives with her mother-in-law, Lady Petherwin. In the three years that have elapsed since her marriage, Ethelberta has been treated to foreign travel and further privileges by Lady Petherwin but restricted from seeing her own poor family.

The story follows Ethelberta's career as a famous poetess and storyteller. Meanwhile, she struggles to support her family and conceal the fact that her father is a butler. Ethelberta easily attracts four very persistent suitors but is reluctant to give her much-coveted hand.