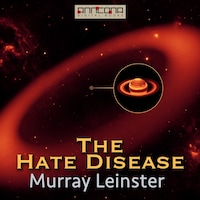 The Hate Disease is a science fiction novella by Murray Leinster first published in  1963.

The Med Service people hit strange problems as routine: if they weren't weirdos, they weren't tough enough to merit Med Service attention. Now the essence of a weird problem is that it involves a factor nobody ever thought of before ... or the absence of one nobody ever missed ...

When they reach Tallien Three they are greeted with a rocket attack by the Paras, a mutated form of human rapidly replacing the “normals”. The normals think it’s a pandemic of demonic possession but Calhoun has his doubts.

If he can keep from turning into a Para, or being assassinated by them he just might figure this thing out.