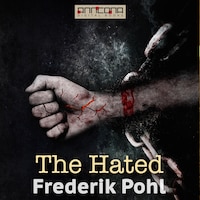 The Hated is a science fiction short story by Frederik Pohl first published in 1958 under the name Paul Flehr.

After space, there was always one more river to cross ... the far side of hatred and murder!

Unfortunately, there is a side-effect to locking a half-dozen men in a cramped space ship to Mars for nine months - they end up loathing each other and actively wanting to kill one another by the time they get back. This is the story of one crewman's attempts to find a killer of a shipmate.

The Hated was first published in Galaxy Science Fiction in January 1958.