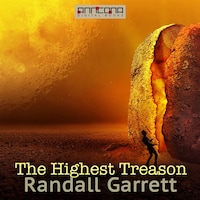 The Highest Treason is a science fiction novella by Randal Garrett first published in 1961.

A fascinating novella about interstellar war, the stagnation of human kind, and the effort of a man to break out of that stagnated society by joining Earth's enemy.

Set in a future in which humanity’s dream of total equality is fully realized and poverty in terms of material wealth has been eliminated, humanity has straight-jacketed itself into the only social system which could make this possible.

Class differentiation is entirely horizontal rather than vertical and no matter what one’s chosen field, all advancement is based solely on seniority rather than ability.

What is an intelligent and ambitious man to do when enslaved by a culture that forbids him from utilizing his God-given talents?

If he’s a military officer in time of war, he might just decide to switch sides. If said officer is a true believer in the principles that enslave him and every bit as loyal as he is ambitious, that’s tantamount to breaking a universal law of physics, but Colonel Sebastian MacMaine has what it takes to meet the challenge.