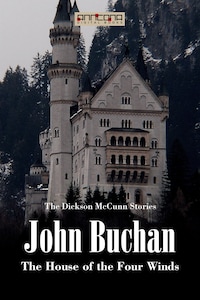 The House of the Four Winds

The House of the Four Winds is a novel of adventure by John Buchan, first published in 1935. It is a Ruritanian romance, and the last of his three Dickson McCunn books. The novel is set in the fictional Central European country of Evallonia in the early 1930s. It concerns the involvement of some Scottish visitors in the overthrow of a corrupt republic and the restoration of the monarchy. It is a sequel to Castle Gay, in which some Evallonians visited Scotland on a secret mission two years before the start of this novel.

At the beginning of the novel several characters formerly seen in Huntingtower and Castle Gay are about to go to Europe for the summer, for a number of different reasons: Mr McCunn going to a German Kurhaus for his health, Alison to join her parents in the Tirol, the Roylances to attend a dull conference in Geneva, Jaikie on a walking tour, Dougal on a mission for his newspaper.

While essentially a romantic adventure, the novel alludes to certain trends in European life such as post-war nationalism and the focus on democracy. Juventus resembles the German Youth Movement, and Mastrovin represents communist gangsterism.

The Dickson McCunn Trilogy is a set of three books by John Buchan. The novels in the trilogy are Huntingtower (1922), Castle Gay (1930) and The House of the Four Winds (1935).