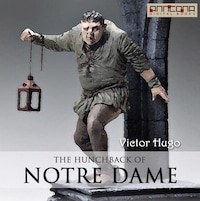 The Hunchback of Notre Dame

21h 41m
631 pages
NarratorMark Nelson
TranslatorIsabel Florence Hapgood
TypeAudiobook, E-book
Categories
NovelsNovels
Share this book
The Hunchback of Notre-Dame (French: Notre-Dame de Paris) is a French Gothic novel by Victor Hugo published in January 14, 1831. The title refers to the Notre Dame Cathedral in Paris, on which the story is centered.
The novel's original French title, Notre-Dame de Paris (the formal title of the Cathedral) indicates that the Cathedral itself is the most significant aspect of the novel, both the main setting and the focus of the story's themes. With the notable exception of Phoebus and Esmeralda's meeting, almost every major event in the novel takes place within, atop, and around the outside of the cathedral, and also can be witnessed by a character standing within, atop, and around the outside of the cathedral. The Cathedral had fallen into disrepair at the time of writing, which Hugo wanted to point out. The book portrays the Gothic era as one of the extremes of architecture, passion, and religion. The theme of determinism (fate and destiny) is explored as well as revolution and social strife.
Hugo introduced with this work the concept of the novel as Epic Theatre. A giant epic about the history of a whole people, incarnated in the figure of the great cathedral as witness and silent protagonist of that history. The whole idea of time and life as an ongoing, organic panorama centered on dozens of characters caught in the middle of that history. It is the first novel to have beggars as protagonists.
Notre Dame de Paris was the first work of fiction to encompass the whole of life, from the King of France to Paris sewer rats, in a manner later co-opted by Honoré de Balzac, Gustave Flaubert and many others, including Charles Dickens. The enormous popularity of the book in France spurred the nascent historical preservation movement in that country and strongly encouraged Gothic revival architecture. Ultimately it led to major renovations at Notre-Dame in the 19th century led by Eugène Viollet-le-Duc. Much of the cathedral's present appearance is a result of this renovation.
Victor Marie Hugo (1802-1885) was a French poet, novelist, and dramatist of the Romantic movement. He is considered one of the greatest and best known French writers. In France, Hugo's literary fame comes first from his poetry but also rests upon his novels and his dramatic achievements. Among many volumes of poetry, Les Contemplations and La Légende des siècles stand particularly high in critical esteem. Outside France, his best-known works are the novels Les Misérables, 1862, and The Hunchback of Notre-Dame, 1831.