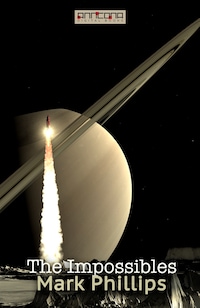 The Impossibles is a science fiction novel by Randal Garrett and Laurence M. Janifer under the pen-name of ”Mark Phillips”, first published under the title Out Like a Light in 1960. This is the book edition, published in 1963.

This second book after BrainTwister and prior to Supermind and tells the story around FBI agent Ken Malone.

Kenneth Malone lives in a world where psionic powers such as telepathy and teleportation exist. He must cope with them as well as an FBI Director who leaves Malone continually confused about what situation he is being asked to handle and what he is expected to do about it.

Kenneth Malone--sometimes known as Sir Kenneth of The Queen's Own FBI--had had problems with telepathic spies, and more than somewhat nutty telepathic counterspies. But the case of the Vanishing Delinquents was at least as bad....

This series is one of the highlights of 1960s SF, and still highly recommended.

Laurence M. Janifer (1933-2002) was an American science fiction author, with a career spanning over 50 years. Though his first published work was a short story in Cosmos magazine in 1953, his career as a writer can be said to have started in 1959 when he began writing for Astounding and Galaxy Science Fiction. He co-wrote the first novel in the ”Psi-Power” series: Brain Twister, written with Randall Garrett under the joint pseudonym Mark Phillips.