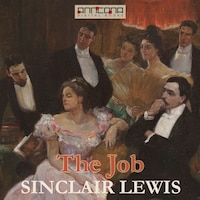 The Job is an early work by American novelist Sinclair Lewis, first published in 1917. It is considered an early declaration of the rights of working women.

The focus is on the main character, Una Golden, who desires to establish herself in a legitimate occupation while balancing the eventual need for marriage.

The story takes place in the early 1900-1920's and takes Una from a small Pennsylvania town to New York. Forced to work due to family illness, Una shows a talent for the traditional male bastion of commercial real estate and, while valued by her company, she struggles to achieve the same status of her male coworkers.

On a parallel track, her quest for traditional romance and love is important but her unique role as a working woman... makes it tough to find an appropriate suitor.

The Job was published before Lewis achieved any significant fame and provides insights on working women as well as the unique nature (for the time) of having a woman as the lead character.