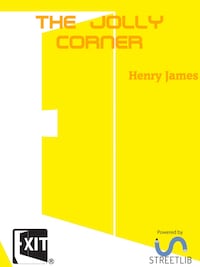 “Every one asks me what I ‘think’ of everything,” said Spencer Brydon; “and I make answer as I can—begging or dodging the question, putting them off with any nonsense.  It wouldn’t matter to any of them really,” he went on, “for, even were it possible to meet in that stand-and-deliver way so silly a demand on so big a subject, my ‘thoughts’ would still be almost altogether about something that concerns only myself.”  He was talking to Miss Staverton, with whom for a couple of months now he had availed himself of every possible occasion to talk; this disposition and this resource, this comfort and support, as the situation in fact presented itself, having promptly enough taken the first place in the considerable array of rather unattenuated surprises attending his so strangely belated return to America.  Everything was somehow a surprise; and that might be natural when one had so long and so consistently neglected everything, taken pains to give surprises so much margin for play.  He had given them more than thirty years—thirty-three, to be exact; and they now seemed to him to have organised their performance quite on the scale of that licence.  He had been twenty-three on leaving New York—he was fifty-six to-day; unless indeed he were to reckon as he had sometimes, since his repatriation, found himself feeling; in which case he would have lived longer than is often allotted to man.  It would have taken a century, he repeatedly said to himself, and said also to Alice Staverton, it would have taken a longer absence and a more averted mind than those even of which he had been guilty, to pile up the differences, the newnesses, the queernesses, above all the bignesses, for the better or the worse, that at present assaulted his vision wherever he looked.