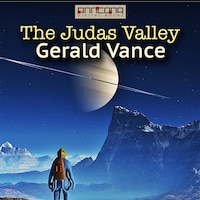 The Judas Valley is a science fiction novella by Randal Garrett and Robert Silverberg (under the pen-name “Gerald Vance”) first published in 1962.

Fifty-nine men and one love interest land on a world that killed most of the first scout ship that landed.

Why did everybody step off the ship in this strange valley and promptly drop dead?

How could a well-equipped corps of tough spacemen become a field of rotting skeletons in this quiet world of peace and contentment?

It was a mystery Peter and Sherri had to solve.

If they could live long enough!

Robert Silverberg (born 1935) is a prolific American author, best known for writing science fiction. He is a multiple winner of both Hugo and Nebula Awards, a member of the Science Fiction and Fantasy Hall of Fame, and a Grand Master of SF.