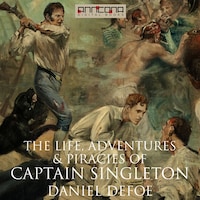 The Life, Adventures and Piracies of the Famous Captain Singleton (1720) is a novel by Daniel Defoe. It is believed to have been partly inspired by the exploits of English pirate Henry Every.

The narrative describes the life of an Englishman, stolen from a well-to-do family as a child and raised by Gypsies who eventually makes his way to sea.

The novel is a bipartite adventure story whose first half covers a traversal of Africa and whose second half taps into the contemporary fascination with piracy. It has been commended for its sensitive depiction of the close relationship between the eponymous hero and his religious mentor, the Quaker William Walters.