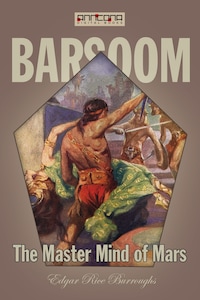 The Master Mind of Mars

187 pages
AuthorEdgar Rice Burroughs
TypeE-book
SeriesThe Barsoom series (part 6)
Categories
NovelsNovelsScience Fiction
Share this book
The Master Mind of Mars is an Edgar Rice Burroughs science fantasy novel, the sixth of his famous Barsoom series. Burroughs' working titles for the novel were A Weird Adventure on Mars and Vad Varo of Barsoom. It was first published in the magazine Amazing Stories Annual vol. 1, July 15, 1927. The first book edition was published by A. C. McClurg in March, 1928.
Burroughs had been unable to place the novel in his standard, higher-paying markets like the Munsey magazines and the Street & Smith line. Some critics have speculated the publishers were put off by its satirical treatment of religious fundamentalists. He eventually sold it to publisher Hugo Gernsback for $1,250, only a third of the rate paid by magazines like Argosy All-Story, where the previous book in the series had first appeared. Gernsback chose the novel's final title and made it the cover feature in his newest magazine.
In this novel Burroughs shifts the focus of the series for the second time, the first having been from early protagonists John Carter and Dejah Thoris to their children after the third book. Now he moves to a completely unrelated hero, Ulysses Paxton, an Earthman like Carter who like him is sent to Mars by astral projection.
Barsoom is a fictional representation of the planet Mars created by American pulp fiction author Edgar Rice Burroughs. The first Barsoom tale was serialized as Under the Moons of Mars in 1912, and published as a novel as A Princess of Mars in 1917. Ten sequels followed over the next three decades, further extending his vision of Barsoom and adding other characters.
The world of Barsoom is a romantic vision of a dying Mars. Writers and science popularizers like Camille Flammarion, who was convinced that Mars was at a later stage of evolution than Earth and therefore much more dry, took the ideas further and published books like Les Terres du Ciel (1884), which contained illustrations of a planet covered with canals. Burroughs gives credits to him in his writings, and goes as far as to say that he based his vision of Mars on that of Flammarion. John Carter is transported to Mars in a way described by Flammarion in Urania (1889), where a man from earth is transported to Mars as an astral body where he wakes up to a lower gravity, two moons, strange plants and animals and several races of advanced humans. In The Plurality of Inhabited Worlds and Lumen, he further speculates about plant people and other creaturs on far away planets, elements that would later appear in the Barsoom stories.
The Barsoom series, where John Carter in the late 1800s is mysteriously transported from Earth to a Mars suffering from dwindling resources, has been cited by many well-known science fiction writers as having inspired and motivated them in their youth, as well as by key scientists involved in both space exploration and the search for extraterrestrial life. Elements of the books have been adapted by many writers, in novels, short stories, comics, television and film.
Edgar Rice Burroughs (1875-1950) was an American author, best known for his creation of the jungle hero Tarzan and the heroic Mars adventurer John Carter, although he produced works in many genres.