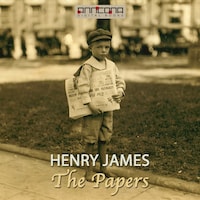 The Papers is a novella by Henry James, written in the autumn of 1902, with two other tales, to make up a collection published in the book The better sort in 1903.

Today the world is awash with “celebrities” whose only accomplishment is being celebrated by the media in all its various forms. Henry James, of course, long pre-dates the multiplicity of media in today’s world, when the press was the main source of adulation, and he was famously averse to giving newspaper interviews himself.

For those interested in the sources of celebrity worship, however, his story, The Papers, showing how two aspiring London journalists worked with those who were famous simply for being famous, helps to give some idea of how such worship was practiced a century ago.