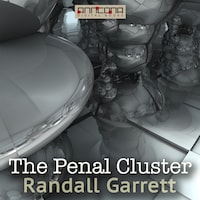 The Penal Cluster is a science fiction novella by Randal Garrett (under the pen-name “Ivar Jorgensen”), first published in 1957.

Tomorrow's technocracy will produce more and more things for better living. It will produce other things, also; among them, criminals too despicable to live on this earth. Too abominable to breathe our free air.

What do you do with telepaths? Chain them to an asteroid of course and just leave them there ..... but why? Wait a minute ... did I just say that the punishment for being a telepath in the future earth was to be chained to an asteroid 50 million miles from earth and then leave them there, comatose, to spin forever in their lonely orbits?

Well, yes, that is what earth's draconian solution was to the sudden emergence of telepath ability. The world wide psychodeviant police had the job of tracking down these terrible deviants and then sending them into space immediately.

But are all telepaths evil? Could one of these psychodeviant police be secret telepath himself?

Listen to this great story and find out why earth felt so terrified of telepaths.