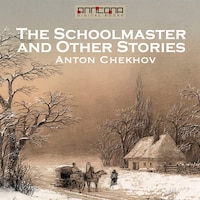 The Schoolmaster and Other Stories

The Schoolmaster and Other Stories is a collection of short stories by Anton Chekhov and was first published in English in 1921.

Anton Chekhov, perhaps better known as a world famous classical playwright for works such as Uncle Vanya and The Cherry Orchard was also a prolific short story writer. The Schoolmaster and Other Stories is one of several of his collections. It's a compilation of 30 short stories.

Some bizarre, some comical but all very interesting.

Stories included are: The Schoolmaster, Enemies, The Examining Magistrate, Betrothed, From the Diary of a Violent-Tempered Man, In the Dark, A Play, A Mystery. Strong Impressions, Drunk, The Marshal's Widow, A Bad Business, In the Court, Boots, Joy, Ladies, A Peculiar Man, At the Barber's, An Inadvertence, The Album, Oh! The Public, A Tripping Tongue, Overdoing It, The Orator, Malingerers, In the Graveyard, Hush!, In an Hotel and In a Strange Land