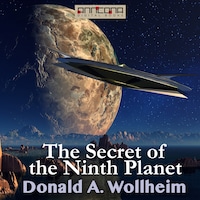 The Secret of the Ninth Planet

The Secret of the Ninth Planet is a science-fiction novel written by Donald A. Wollheim and first published in 1959. Wollheim takes his heroes on a grand tour of the solar system as that team struggles to prevent an alien force from blowing up the sun.

On the day that the theft of the solar system's light begins. Burl Denning is with an archaeological expedition in the Andes, only a few miles from the source of the ”disturbance.” Within hours the United States Air Force has ordered the expedition to investigate the strange phenomenon that is causing a dimness and a drop in temperature throughout the world.

This is the start of a fantastic adventure that eventually takes Burl, a high-school senior, on the first circumnavigation of the solar system. On planet after planet, he and the crew of the Magellan, a gleaming, powerful, and virtually untested spaceship, discover the weird trappings of a brilliantly-designed Sun-tap station. Each planetfall brings unexpected hazards, as the ship draws closer and closer to solving the mystery of the theft.

The author has based his story on science fact. Researchers are actually at work on the possibilities of just such a circumnavigation, and on another surprising theory brought out in this book.

Donald A. Wollheim (1914 -1990) was an American science fiction editor, publisher, writer, and fan. A founding member of the Futurians, he was a leading influence on science fiction development and fandom in the 20th century United States.