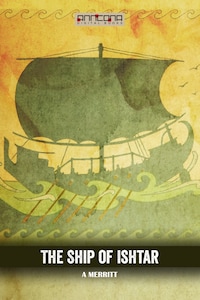 The Ship of Ishtar

253 pages
AuthorAbraham Merritt
TypeE-book
Categories
NovelsNovelsScience Fiction
Share this book
The Ship of Ishtar is a fantasy novel by A. Merritt. Originally published as a magazine serial in 1924, it has appeared in book form innumerable times.
The archaeologist hero, Kenton, receives a mysterious ancient Babylonian artifact, which he discovers contains an incredibly detailed model of a ship. A dizzy spell casts Kenton onto the deck of the ship, which becomes a full-sized vessel sailing an eternal sea. At one end is Sharane the assistant priestess of Ishtar and her female minions, and at the other is Klaneth the assistant priest of Nergal and his male minions, representatives of two opposed deities. None of them can cross an invisible barrier at the midline of the ship, but Kenton can. His arrival destabilizes a situation that had been frozen for 6,000 years, and fantastic adventures ensue.
The novel is not only a rousing fantasy adventure story, but a philosophical exploration of the relationship between material reality and the abstract concepts through which humans struggle to understand it.
Abraham Merritt (1884-1943), is one of the forgotten masters of weird fiction. His work ranges from horror (Burn Witch Burn) to epic fantasy (The Ship of Ishtar). His writing could be described as a blend of dark fantasy and the 19th century tale of adventure in the style of H. Rider Haggard, with a dash of the Conan Doyle of the Professor Challenger stories. Merritt's stories typically revolve around conventional pulp magazine themes: lost civilizations, hideous monsters, etc. His heroes are gallant Irishmen or Scandinavians, his villains treacherous Germans or Russians and his heroines often virginal, mysterious and scantily clad. What sets Merritt apart from the typical pulp author, however, is his lush, florid prose style and his exhaustive, at times exhausting, penchant for adjective-laden detail. Abraham Grace Merritt was inducted in The Science Fiction and Fantasy Hall of Fame in 1999, its fourth class of two deceased and two living writers.