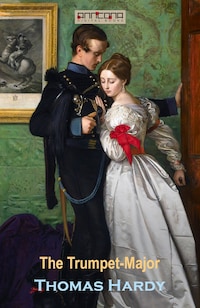 The Trumpet-Major is a novel by English author Thomas Hardy published in 1880, and his only historical novel.

Our heroine, Anne Garland, lives quietly in a rural community deep in the English countryside, However, the arrival of several regiments preparing for an expected invasion brings colour and chaos to the county.

A graceful and charming young woman, Anne is pursued by three suitors: John Loveday, the trumpet-major in a British regiment, honest and loyal; his brother Robert, a merchant seaman and womaniser, and Festus Derriman, the cowardly son of the local squire. Unusually for a Hardy novel, the ending is not entirely tragic; however, there remains an ominous element in the probable fate of one of the main characters.

The novel is set in Weymouth during the Napoleonic wars; the town was then anxious about the possibility of invasion by Napoleon. Of the two brothers, John fights with Wellington in the Peninsular War, and Bob serves with Nelson at Trafalgar. The Napoleonic Wars was a setting that Hardy would use again in his play, The Dynasts, and it borrows from the same source material.