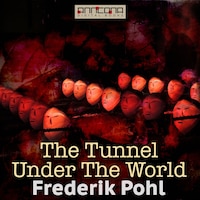 The Tunnel Under The World

The Tunnel Under The World is a science fiction novella by Frederik Pohl first published in 1955.

This famous Pohl story explores cybernetic robots and implanted personalities in a way that certainly expanded my way of looking at reality. Is that wall really real? or is it just kinda, sorta real? And who am I?

Our protagonist keeps waking up on the same day, albeit unknowingly, and has strange experiences but fails to recall them after falling asleep. This goes on until he chances to escape the ”reset” and sets about trying to discover what's happening to him. An interesting ”put yourself in their shoes” story.

This is actually a horror story and the end won´t fail to send a shiver down your spine...

The novella has often been anthologised, notably appearing in The Golden Age of Science Fiction, edited by Kingsley Amis (1981). The Tunnel Under the World was first published in 1955 in Galaxy magazine.