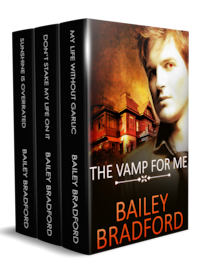 The Vamp for Me: Part One: A Box Set

The Vamp for Me series: Part One

My Life Without Garlic

Some things in life just might be worth giving up garlic for.

It was simple curiosity that led Augustin to the vampire dating site—he thought it must be a joke started up by a bunch of weirdos. Man, was he right—but it just so happens that those weirdos really are vampires, and when one shows up at his place, Augustin’s world is turned upside down.

First he’s got a psychotic vampire to deal with. Then he’s got one who is much more fun hanging around.

Except now that Augustin knows that vampires exist, he can’t be left alive. Or can he? When an alternative is offered up, Augustin doesn’t care for it, either. After all, he doesn’t want to be whisked off to some disgusting vampire den.

Tony’s the vampire next in line to lead the coven. He wants to be a fair man, and that means arguing against killing Augustin. If he’s also attracted to the sarcastic, adorable man, where’s the harm in that?

The attraction between Augustin and Tony is undeniable, but deny it is what they both try to do. Someone is going to have to bend or break.

Don't Stake My Life on It

Stakes, kilts and holy water—Andrew Meyer is in for the time of his life!

Radney’s tired of being the coven oddball. He had his reasons for being the way he was, and he let those reasons rule his life for centuries. Another mistake—almost harming a human he’d been sent to keep an eye on—has sent Radney on a mission of self-improvement. He’s going to conquer his issues and be the best damned vamp ever!

Andrew Meyers has the term paper from hell to write. It needs to be original and intriguing. What could be more so than people with a vampire fetish?

But when that fetish turns out to be one he has, for a very sexy, kilt-wearing, neurotic vampire, the tables are turned. Andrew isn’t prepared to find out that vampires are real, but he learns it anyway. With help from his twin brother, Erin, he just might be able to find a happy ending—or an ecstatic beginning—for him and his hot as hell red-headed vamp. If he’s careful, and patient, he might even find the vamp for him.

Life with vamps is never easy.

Abernathy Meyers is already mated to a vamp, Zebulon. It’s just too bad that Zebulon doesn’t give a darn about him. Abbie’s stuck with the man for eternity—or until they die. Some days, Abbie thinks that can’t happen soon enough. He’s tired of being treated badly, yet he doesn’t really want to make his earthly exit yet.

Because he’s longed for another man—another vampire—for years. Forbidden love—is anything more compelling, or more heart-breaking?

There’s a twisted past, a hidden story linking Abbie, Zebulon and the coven leader, Claude.

Claude lives with a fear of turning to dust at any moment. It isn’t reasonable, but he can’t shake it. He’s let his own fears impede his potential happiness, and instead he puts the needs of his coven first, ignoring his own. But if he’s deliberately blind to one particular human’s needs because that human is a mate to another vampire, then is Claude truly leading to the best of his ability?

It’s a tough question for him to answer and soon, he’ll have to make a choice that will affect him and Abbie, forever.