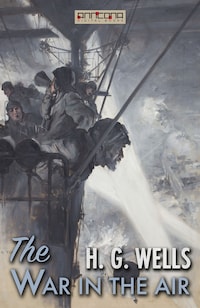 The War in the Air

The War in the Air is a military science fiction novel by H. G. Wells, written in 1907 and serialised and published in 1908 in The Pall Mall Magazine.

The novel is like many of Wells's works notable for its prophetic ideas, images, and concepts—in this case, the use of the aircraft for the purpose of warfare and the coming of World War I. The novel's hero is Bert Smallways, a ”forward-thinking young man” and a ”kind of bicycle engineer of the let's-'ave-a-look-at-it and enamel-chipping variety.”

The War in the Air was written during a prolific time in H. G. Wells's writing career. Having withdrawn from British politics to spend more time on his own ideas, he published twelve books between 1901 and 1911, including this one. While many British citizens were surprised by the advent of World War I, Wells had already written prophetically about such a conflict.