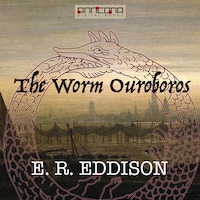 The Worm Ouroboros is a heroic high fantasy novel by Eric Rücker Eddison, first published in 1922. The book describes the protracted war between the domineering King Gorice of Witchland and the Lords of Demonland in an imaginary world that appears mainly medieval and partly reminiscent of Norse sagas. The work is slightly related to Eddison's later Zimiamvian Trilogy, and collectively they are sometimes referred to as the Zimiamvian series.

A framing story in the first two chapters describes the world of the novel as Mercury, though it is clearly a fantasy version of Earth, a ”secondary world”; no effort was made to conform to the scientific knowledge of Mercury as it existed at the time of writing. At a number of points the characters refer to their land as Middle earth, used here in its original sense of ”the known world”, and the gods worshipped have the names of deities from Greek mythology.

In contrast to The Lord of the Rings, to which mythopoeia is central, Eddison makes few references either to actual mythology or to an invented mythology after the fashion of the Silmarillion. One example of this is Eddison's ad hoc names for people and places versus Tolkien's invention of entire languages.

Also, while The Lord of the Rings is written mostly in modern English, Eddison wrote The Worm Ouroboros largely in sixteenth-century English, making use of his experience translating Norse sagas and reading medieval and Renaissance poetry; a nearly unique approach among popular fantasy novels. Eddison incorporates a number of actual early modern poems into the story, including Shakespeare's 18th sonnet, all meticulously credited in an appendix.

Eddison is best known for the early romance The Worm Ouroboros (1922) and for three volumes set in the imaginary world Zimiamvia, known as the Zimiamvian Trilogy: Mistress of Mistresses (1935), A Fish Dinner in Memison (1941), and The Mezentian Gate (1958).

The Zimiamvia books were conceived not as a trilogy but as part of a larger work left incomplete at Eddison's death. The Mezentian Gate itself is unfinished, though Eddison provided summaries of the missing chapters shortly before his death. C. S. Lewis wrote a blurb for the cover of The Mezentian Gate when it was published calling Eddison's works ”first and foremost, of art.” Some additional material from this book was published for the first time in the volume Zimiamvia: A Trilogy (1992).