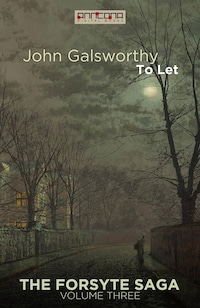 To Let, first published 1921, is the third novel in the trilogy The Forsyte Saga and concluded the series of three novels and two interludes published between 1906 and 1921 by Nobel Prize-winning English author John Galsworthy. In 2003, The Forsyte Saga was listed on the BBC's The Big Read poll of the UK's ”best-loved novel”.

Also included in this edition is On Forsyte 'Change (1930) which deals mainly with the older Forsytes before the events chronicled in The Man of Property. Galsworthy states in a Foreword that ”They have all been written since Swan Song was finished but in place they come between the Saga and the Comedy . . .”.