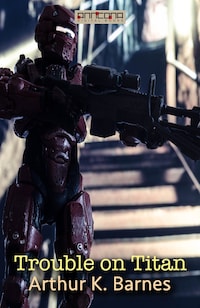 ”When the Queen of the Spaceways meets the King of the Interplanetary Wilds, there's a checkmate in the stalking of Saturn's most dangerous game!”

The trapper Gerry Carlyle, accompanied by her husband Tommy Strike - are in the habit of zooming around the Solar System in Gerry's ship the Ark in order to capture alien beasts for zoos on Earth.  This time the lady aims to catch a Saturnian creature called a dermaphos.

”The Huntress laughed at the challenge to her skill… till she herself became the prey!”

It is worth mentioning that one of the main characters is the female captain of a ship. Not so often seen in fiction from the 1930s.

Barnes was most noted for his vivid and believable portrayals of alien life. As such, he is compared to Stanley G. Weinbaum. Before Barnes (and Weinbaum), SF writers usually portrayed aliens as earth-like monsters, with little originality.