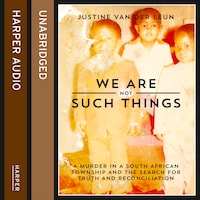 We Are Not Such Things

In 1993, in the final, fiery days of apartheid, a 26-year-old white American activist called Amy Biehl was murdered by a group of young black men in a township near Cape Town. Four men were tried and convicted of the murder and sentenced to eighteen years in prison. A few years later they had been freed. Two of the men were subsequently employed by Amy’s parents to work at a charity set up in her memory. The men grew close to the Biehls. They called them ‘Grandmother’ and ‘Grandfather’.

Justine van der Leun, an American writer living in South Africa, set out to tell this twenty-year story, but as she delved into the case, the prevailing narrative started to unravel. Why didn’t the eyewitness reports agree on who killed Amy Biehl? Were the men convicted of the crime actually responsible? And could it be that another violent crime committed on the same day, in the very same area, was connected to the murder of Amy Biehl?

‘Deeply researched and thought-provoking . . . an engaging take on a murder that might have derailed democracy’ Economist