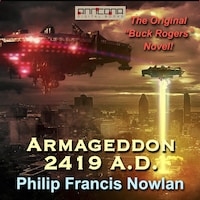 Nowlan’s novella tells about America in the 25th century, conquered by Hans in 2109 AD and only now beginning to rebel.

Living in cooperative gangs and hiding in the forests from the Hans, Americans secretly rebuild their civilization and develop the new technologies ”ultron” and ”inertron”.
Inertron is a substance with ”reverse weight” (anti-gravitational properties), so that a person carrying an amount of inertron equal to most of his weight (in the form of a “jumper” – ”rocket motors encased in inertron blocks and strapped to the back”) can travel rapidly across the country in long leaps.
Ultron, in turn, is an ”absolutely invisible and non-reflective solid of great molecular density and moderate elasticity, which has the property of being 100 percent conductive to those pulsations known as light, electricity and heat.”
They use these technologies, as well as explosive rockets and radio frequencies the enemy cannot detect, in their struggle with the Hans.

A sequel called The Airlords of Han was published in the March 1929 issue of Amazing Stories.

The character Buck Rogers first appeared in Armageddon 2419 A.D. as Anthony Rogers. The characters and setting eventually evolved into Buck Rogers. The comic strip Buck Rogers ran for over forty years and spun off a radio series, a 1939 movie serial, and two television series. Buck Rogers was a huge success, spawning many imitators such as Flash Gordon.

Philip Francis Nowlan (1888-1940) was an American science fiction author, best known as the creator of Buck Rogers. Nowlan also wrote several other novellas for the science fiction magazines as well as the posthumously published mystery, The Girl from Nowhere.