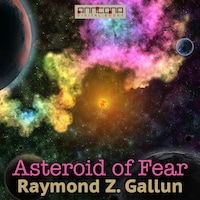 Asteroid of Fear is a science fiction novella by Raymond Z. Gallun first published in 1951.

“All space was electrified as that harsh challenge rang out ... but John Endlich hesitated. For he saw beyond his own murder—saw the horror and destruction his death would unleash—and knew he dared not fight back!”

John Endlich needed to clean up his act. Gambling, drinking, a hot temper and wanderlust were the last things Rose and the kids needed.

So he went to the Homesteaders Office and signed up to terraform Vesta, a chunk of a once thriving alien planet that had exploded from within; a flat lump of crust which was now the remains of a farm on one side and a mining operation on the other.

The miners hated Endlich and sabotaged his plans at every opportunity. They were going to kill him and his family if he didn’t find a way to stop them.

Asteroid of Fear was first published in the March, 1951 edition of Planet Stories magazine.