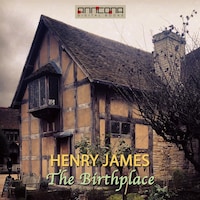 The Birthplace is a short story by Henry James, first published in his collection The Better Sort in 1903.

A witty satire on the excesses of the worship of William Shakespeare, the story reflects James's skepticism about the authorship of Shakespeare's plays.

The story has to do with Mr. and Mrs. Gedge, tempted away from a dreary northern town library, which he runs, to become the wardens – caretakers and tour guides – of the house where the greatest writer of the English language was born, and in which he grew up. Or did he?

There is, after all, a paucity of facts about His life (in James's text, that pronoun is always capitalized, as befits a deity) and only the slenderest of historical evidence about the existence of such a man. No matter; what is important is the myth of his life, and the myth needs to be cared for and fostered so that crowds upon crowds of tourists may come, and, with a proper reverence, worship at His Birthplace. And yet it is only myth, and the more he thinks of it, the unhappier poor honest Gedge. What should the skeptical Gedge do about it? What, if anything, will he do?