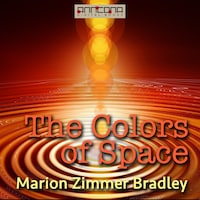 The Colors of Space

The Colors of Space is a science fiction novel by American writer Marion Zimmer Bradley.

Bart Steele, Space Academy graduate, is on his way home to his father's business - he runs a fleet of spaceships for interstellar travel. The secret for fast interstellar travel though is still tightly kept by the alien race Lhari. An agreement between humans and Lhari has been made that permits humans only to travel in cold sleep as passengers aboard Lhari vessels as to not reveal the secret.

Some humans – the Mentorians - have had a slight genetic shift which enhanced their vision to withstand the light levels that the aliens Lhari use and live in. Mentorians perceive a wider optical spectrum than ordinary humans – some can see the ‘eighth color’. Mentorians act as translators, middleman and interpreters between the two races. But their ability sets them apart from the rest of humanity. Bart, half Mentorian, has this ability.

Bart, surgically altering his appearance to hire as a Lhari on a homeworld bound Lhari vessel, attempts to steal the secret of the Warp Drive - an attempt on which countless humans spies have failed before.

The Colors of Space was first published in book form in 1963.

Marion Eleanor Zimmer Bradley (1930-1999) was an American author of fantasy novels such as The Mists of Avalon and the Darkover series.