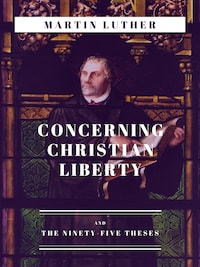 105 pages
AuthorMartin Luther
TypeE-book
Categories
Non-fictionHistoryReligion & Philosophy
Share this book
Concerning Christian Liberty sometimes also called ”A Treatise on Christian Liberty”  or ”On the Freedom of a Christian” was the third of Martin Luther’s major reforming treatises of 1520. In the treatise, Luther, seminal figure in the Protestant Reformation, develops the concept of Justification by faith.
He wrote the Ninety-five Theses against the contemporary practice of the Roman Catholic Church with respect to indulgences.The Theses were quickly reprinted, translated, and distributed throughout Germany and Europe.
His theology challenged the authority and office of the Pope. His refusal to renounce all of his writings resulted in his excommunication.The indulgence controversy set off by the Theses was the beginning of the Reformation.
Concerning Christian Liberty is followed by The Ninety-five Theses  and four letters of Martin Luther addressed to : the Archbishop Albrecht of Mainz, John Staupitz, Professor of Sacred Theology and Pope Leon X.

Excerpt: ”Hence a right faith in Christ is an incomparable treasure, carrying with it universal salvation and preserving from all evil, as it is said, ”He that believeth and is baptized shall be saved; but he that believeth not shall be damned” (Mark XVI. 16). Isaiah, looking to this treasure, predicted, ”The consumption decreed shall overflow with righteousness. For the Lord God of hosts shall make a consumption, even determined (verbum abbreviatum et consummans), in the midst of the land” (Isa. X. 22, 23). As if he said, ”Faith, which is the brief and complete fulfilling of the law, will fill those who believe with such righteousness that they will need nothing else for justification.” Thus, too, Paul says, ”For with the heart man believeth unto righteousness” (Rom. X. 10).”
”45. Christians are to be taught that he who sees a man in need, and passes him by, and gives [his money] for pardons, purchases not the indulgences of the pope, but the indignation of God.”