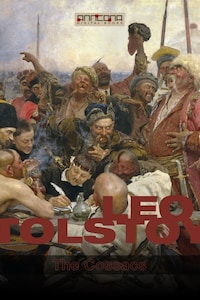 213 pages
AuthorLeo Tolstoy
TranslatorLouise MaudeAlymer Maude
TypeE-book
Categories
NovelsNovels
Share this book
The Cossacks is a novel by Leo Tolstoy, published in 1863 in the popular literary magazine The Russian Messenger. It was originally called Young Manhood. Both Ivan Turgenev and the Nobel prize-winning Russian writer Ivan Bunin gave the work great praise, Turgenev calling it his favorite work by Tolstoy.
The Cossacks is believed to be somewhat autobiographical, partially based on Tolstoy's experiences in the Caucasus during the last stages of the Caucasian War.
Disenchanted with his privileged life in Russian society, nobleman Dmitri Olenin joins the army as a cadet, in the hopes of escaping the superficiality of his daily life. On a quest to find ”completeness,” he naively hopes to find serenity among the ”simple” people of the Caucasus. In an attempt to immerse himself in the local culture, he befriends an old man. They drink wine, curse, and hunt pheasant and boar in the Cossack tradition, and Olenin even begins to dress in the manner of a Cossack. He forgets himself and falls in love with the young Maryanka, in spite of her fiancee Lukashka. While spending life as a Cossack, he learns lessons about his own inner life, moral philosophy, and the nature of reality. He also understands the intricacies of human psychology and nature.
Tolstoy began work on the story in August 1853. In August 1857, after having reread Iliad, he vowed to completely rewrite The Cossacks. In February 1862, after having lost badly at cards he finished the novel to help pay his debts. The novel was published in 1863, the same year his first child was born.
Soviet filmmaker Vasili Pronin directed a movie adaptation of The Cossacks in 1961 that premiered at the annual Cannes Film Festival.
Count Lev Nikolayevich Tolstoy; (1828-1910), also known as Leo Tolstoy, was a Russian writer who primarily wrote novels and short stories. Tolstoy was a master of realistic fiction and is widely considered one of the world's greatest novelists. He is best known for two long novels, War and Peace (1869) and Anna Karenina (1877).
Tolstoy is one of the giants of Russian literature. His contemporaries paid him lofty tributes. Fyodor Dostoyevsky thought him the greatest of all living novelists. Later critics and novelists continue to bear testament to Tolstoy's art. Virginia Woolf declared him the greatest of all novelists. James Joyce noted that, ”He is never dull, never stupid, never tired, never pedantic, never theatrical!”. Thomas Mann wrote of Tolstoy's seemingly guileless artistry: ”Seldom did art work so much like nature”.