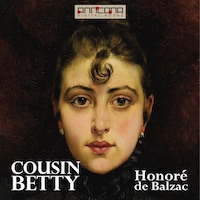 Cousin Betty (La Cousine Bette), published in serial format in 1846, was one of the last and greatest of Balzac's works. It was part of his long novel collection titled La Comédie Humaine.

Set in mid-19th century Paris, it tells the story of an unmarried middle-aged woman who plots the destruction of her extended family. Betty works with Valérie Marneffe, an unhappily married young lady, to seduce and torment a series of men.

As we follow her schemes to bring ruin upon the more privileged members of her family, we see a society in transition. The stability and idealism of the old order give way to a new bourgeois world in which virtue is strangled in the struggle for power and money.

In this novel, Balzac searchingly probes the psychology and motivations of his characters: his work influenced the development of literary realism, as practised by writers such as Dickens, Dostoyevsky, Flaubert, Proust, and Henry James.

Cousin Betty is considered Balzac's last great work. His trademark use of realist detail combines with a panorama of characters returning from earlier novels.

A number of film versions of the story have been produced.