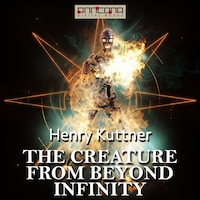 The Creature from Beyond Infinity

The Creature from Beyond Infinity is a science fiction novel by American author Henry Kuttner first published in 1940.

Henry Kuttner wrote a lot, in several different styles, but his work was nearly always fast-paced, full of action, and either humorous or creepy, depending on what was called for.  His novel The Creature from Beyond Infinity has some of all of that, and more.

Like a great, lethal snake, plague creeps through the galaxies. No conscious entity can halt its progress, and life is slowly draining from planet after planet.

Only one super-intelligence is capable of preventing cataclysm. To do it, he must penetrate far beyond infinity--to the formless, deathless creature out to kill the universe.

A lone space traveler arrives on Earth seeking a new planet to colonize, his own world dead. At the same time a mysterious plague has infected Earth that will wipe out all life.

Can a lone scientist stop the plague and save the world? Or will the alien find himself on another doomed planet?

Henry Kuttner (1915–1958) was an American author of science fiction, fantasy and horror, an author who was one of the half dozen or so pillars of the Golden Age of Sci-Fi.

Marion Zimmer Bradley is among many authors who have cited Kuttner as an influence. Her novel The Bloody Sun is dedicated to him. Roger Zelazny has talked about the influence of The Dark World on his Amber series.