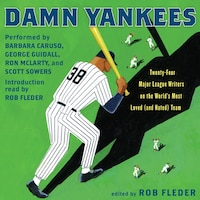 Everyone has an opinion about the Yankees. More than an opinion in most cases, but an opinion at the very least.
—From the Introduction

Love them or hate them, the New York Yankees have been an American institution for nearly a century. With their rich history and colorful cast of characters, the Yankees never fail to inspire or provoke. In this exciting compendium, some of today's most acclaimed writers—including Pete Dexter, Colum McCann, Roy Blount Jr., Dan Barry, Jane Leavy, Charles P. Pierce, J. R. Moehringer, Daniel Okrent, Frank DeFord, Bill James, and many more—step up to the plate to take their cuts. The result is a collection of original essays as idiosyncratic and expansive as the team that has inspired them: ruminations on Babe Ruth's gravestone, Derek Jeter's swing, and the upper-deck vantage of the Oldest Living Yankee; dual allegiances; mortal rivalries; and every other subject that spans from the hilarious (the Yankee wife-swap of the '70s) to the sublime (the grace of Catfish Hunter).

Superbly written, deeply insightful, and full of both passion and humor, Damn Yankees is a completely fresh look at baseball's most enduring franchise by a Murderers' Row of writers as stacked as that of the 1927 Yanks.