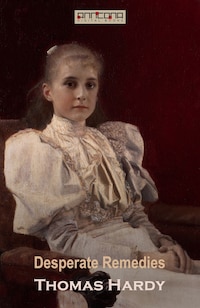 Desperate Remedies is a novel by English author Thomas Hardy, first published anomously in 1871. It is Hardy’s second novel, although the manuscript of his first novel, The Poor Man and the Lady, never was published and that manuscript is lost.

After Hardy had trouble publishing his first novel, he was told to ”attempt a novel with a purely artistic purpose, giving it a more 'complicated' plot than was attempted with his first, unpublished novel.” The publication of Desperate Remedies was Hardy's breakthrough, and the first of a long string of novels that propelled him to the forefront of Victorian letters.

In Desperate Remedies a young woman, Cytherea Graye, is forced by poverty to accept a post as lady's maid to the eccentric Miss Aldclyffe, the woman whom her father had loved but had been unable to marry.

Cytherea in turn loves a young architect, Edward Springrove; but will Miss Adclyffe's machinations, the knowledge that Edward is already engaged to a woman whom he does not love, and the urgent need to support her sick brother drive Cytherea to accept the hand of Aeneas Manston? Will true love triumph in the end or will she be forced to live a life of misery with a man she doesn't love?