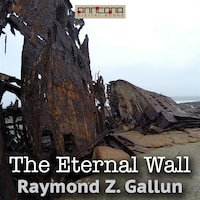 The Eternal Wall is a science fiction short story by Raymond Z. Gallun first published in 1942.

”A scream of brakes, the splash into icy waters, a long descent into alkaline depths ... it was death. But Ned Vince lived again--a million years later!”

A man dies in a car crash, but rather than rot or become fossilized, he is mummified, so traces of his cells still exist a million years later when intelligent rodents discover his body.

The Eternal Wall was first published in Amazing Stories November 1942