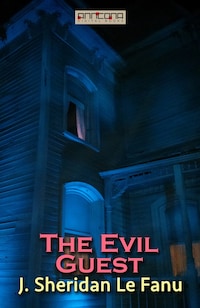 The Evil Guest is a gothic mystery novel by J. Sheridan Le Fanu.

An unwanted guest visiting a dreary and isolated home is murdered; the thriller leads the reader down countless ‘dead’ ends before revealing the identity of the guilty party.

The letter from the rich cousin came at a low point in the Marston family's finances. The man was as ill-bred and pushing as ever: utterly the model of a noxious relation -- but he was rich, and the Marstons were all but destitute. The family could hardly refuse him. But they would come to rue that letter, and the invitation that followed it; it was the beginning of the end for all of them. Of course it was! Common sense tells us not to take on . . . THE EVIL GUEST.

The Evil Guest was first published in 1895.

Joseph Thomas Sheridan Le Fanu (1814-1873) was an Irish writer of Gothic tales and mystery novels. He was the leading ghost-story writer of the nineteenth century and was central to the development of the genre in the Victorian era. M. R. James described Le Fanu as ”absolutely in the first rank as a writer of ghost stories”. Three of his best known works are Uncle Silas, Carmilla and The House by the Churchyard.