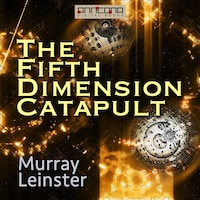 The Fifth-Dimension Catapult is a science fiction novella by Murray Leinster first published in 1931.

The Story of Tommy Reames' Extraordinary Rescue of Professor Denham and his Daughter - Marooned in the Fifth Dimension.

THIS story has no normal starting-place, because there are too many places where it might be said to begin. One might commence when Professor Denham, Ph. D., M. A., etc., isolated a metal that scientists have been talking about for many years without ever being able to smelt. Or it might start with his first experimental use of that metal with entirely impossible results.

Or it might very plausibly begin with an interview between a celebrated leader of gangsters in the city of Chicago and a spectacled young laboratory assistant, who had turned over to him a peculiar heavy object of solid gold and very nervously explained, and finally managed to prove, where it came from. With also impossible results, because it turned “King” Jacaro, lord of vice-resorts and rum-runners, into a passionate enthusiast in non-Euclidean geometry. The whole story might be said to begin with the moment of that interview.

But that leaves out Smithers, and especially it leaves out Tommy Reames. So, on the whole, it is best to take up the narrative at the moment of Tommy’s first entrance into the course of events.

The Fifth-Dimension Catapult was first published in Astounding Stories of Super-Science January 1931.