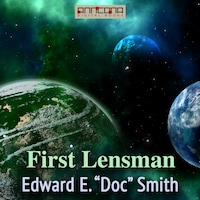 First Lensman is a science fiction novel and space opera by American author E. E. ”Doc” Smith. It was first published in 1950.

First Lensman is the sequel to Triplanetary, and the second book of E.E. ”Doc” Smith's classic Lensman series.

It was The Secret Planet. No human had ever landed on the hidden planet of Arisia. A mysterious space barrier turned back both men and ships.

Then the word came to Earth, ”Go to Arisia!”, Virgil Samms of the Galactic Patrol went--and came back with the Lens, the strange device that gave its wearer powers no man had ever possessed before.

Samms knew the price of that power would be high. But even he had no idea of the ultimate cost, and the weird destiny waiting for the First Lensman.

Although it is the second novel in the Lensman series, it was the sixth written. The novel chronicles the founding of the Galactic Patrol by Virgil Samms, the first sentient being in our cosmos to wear the ”Lens”, a unique badge of authority which is actually a form of ”pseudo-life” that grants telepathic powers to the defenders of Civilization.