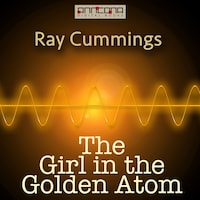 The Girl in the Golden Atom

The Girl in the Golden Atom is a science fiction novel by American author Ray Cummings first published in 1923.

A classic work of science fiction, this novel was one of the first to explore the world of the atom.

The Girl in the Golden Atom is the story of a young chemist who finds a hidden atomic world within his mother’s wedding ring. Under a microscope, he sees within the ring a beautiful young woman sitting before a cave.

While examining a golden ring under a microscope, a chemist discovers a sub-atomic world. During his examination of this world he sees a beautiful young girl.

After developing chemicals that will allow him to either shrink or grow larger in size, he and three friends journey to this small world.