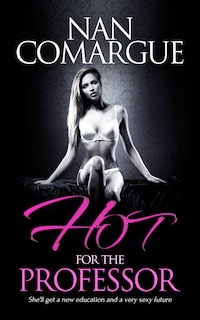 Hot for the Professor

When Avery’s down and out, her embarrassing past with Logan forces her into an educational—and very sexy—future.

Years ago, Avery’s neighbor Logan proposed to her on his eighteenth birthday. She’d always known the genius next door was different. After all, he’d become a professor in his teens. But that day, for the first time, she’d actually seen him as a man and it had disturbed her, so much so that she’d avoided Logan for years afterward.

Now Avery’s broken up with her employer and live-in boyfriend and she’s out of a job and out on the street. As a last resort, she reaches out to Logan’s mother. Big mistake. Logan gets involved and suddenly Avery is facing all the accumulated history between them.

Logan is trying to help her get back on her feet, but Avery suspects he has an ulterior motive. When it comes out that he’s still suffering from that old teenage obsession with her, she severs the relationship, no matter how much it hurts in the process.

After all, the two of them couldn’t possibly work out, could they?