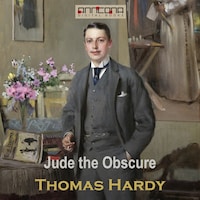 Jude the Obscure is the last completed of English writer Thomas Hardy's novels, began as a magazine serial in December 1894 and was first published in book form in 1895.

Eleven-year-old Jude Fawley, inspired by his teacher Mr. Phillotson, who leaves Marygreen for Christminster to take a university degree, decides to adopt the same course for himself. Raised by his great-aunt, he studies hard with the aid of some old Latin and Greek books sent to him by Phillotson.

He trains as a stonemason in order to enable him to support himself when at the university. However when he finally arrives in Christminster he soon finds that a university education is not easily come by for one of his social standing. Meeting and falling in love with his cousin Sue Bridehead his future becomes a series of challenges to his moral, religious and social beliefs.

The novel caused quite a stir in late Victorian England due in part to it’s depiction of marriage and the role religion played in it. Savagely criticised on publication it led to Hardy turning from novel writing and concentrating for the rest of his career on poetry alone. It’s now considered one of Hardy’s finest works and is held up as an example of English novel writing at it’s best.