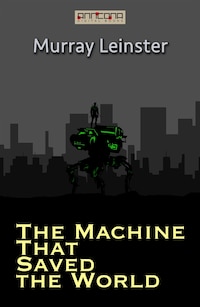 The Machine That Saved the World

The Machine that Saved the World is a science fiction novella by Murray Leinster first published in 1957.

They were broadcasts from nowhere--sinister emanations flooding in from space--smashing any receiver that picked them up. What defense could Earth devise against science such as this?

In the far future of 1972, on a secret military installation, Staff Sergeant Bellews is an expert on the latest scientific discovery: a way for ordinary machines like vacuums and lawnmowers to gather experience in their jobs, becoming error free over time.

Then the strange broadcasts began to blow up transmitters everywhere. Were they from space? Enemies? The future? He didn't care until they started messin' with his machines.

Then he took it personally.

The Machine that Saved the World was first published in Amazing Stories December 1957.