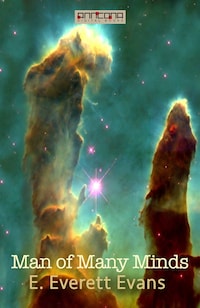 Man of Many Minds

Man of Many Minds is a science fiction novel by American author E. Everett Evans first published in 1953.

Cadet George Hanlon of the Inter-Stellar Corps had to make an important decision, the most difficult of his short lifetime.

With graduation just a few short weeks ahead, he was asked to join the Corps' Secret Service, but in order to accept he had to be expelled from the Corps in disgrace.

Why had he been chosen for this secret honor and the public dishonor that went with it?

A fascinating and thrilling tale of the spaceways in the world of tomorrow introduced by the Atomic Age. It is a story which will enable you to experience vicariously the excitement and wonder of the days to come.