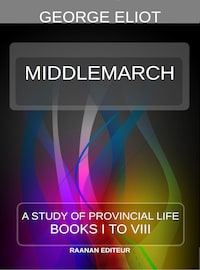 1066 pages
AuthorGeorge Eliot
TypeE-book
SeriesJeunesse-Scolaire-Classiques pour tous
Categories
NovelsNovels
Share this book
Middlemarch, A Study of Provincial Life is a novel by the English author George Eliot (Mary Anne Evans), appearing in eight instalments (volumes) in 1871 and 1872. Set in a fictitious Midlands town from 1829 to 1832, it follows distinct, intersecting stories with many characters. Issues include the status of women, the nature of marriage, idealism, self-interest, religion, hypocrisy, political reform, and education. Despite comic elements, Middlemarch uses realism to encompass historical events: the 1832 Reform Act, early railways, and the accession of King William IV. It views contemporary medicine and examines reactionary views in a settled community facing unwelcome change. Eliot began writing the two pieces that would form the novel in 1869–1870 and completed it in 1871. Initial reviews were mixed, but it is now seen widely as her best work and one of the great novels in English.

Plot
Middlemarch centres on the lives of the residents of Middlemarch, a fictitious Midlands town, from 1829 onwards – the years preceding the 1832 Reform Act. The narrative is variably considered to consist of three or four plots of unequal emphasis:[16] the life of Dorothea Brooke; the career of Tertius Lydgate; the courtship of Mary Garth by Fred Vincy; and the disgrace of Nicholas Bulstrode.
Dorothea Brooke is a 19-year-old orphan, living with her younger sister, Celia, under the guardianship of her uncle, Mr Brooke. Dorothea is an especially pious young woman, whose hobby involves the renovation of buildings belonging to the tenant farmers, though her uncle discourages her. Dorothea is courted by Sir James Chettam, a young man close to her own age, but she remains oblivious to him. She is instead attracted to The Reverend Edward Casaubon, who is 45, and Dorothea accepts his offer of marriage, despite her sister's misgivings. Chettam is meanwhile encouraged to turn his attention to Celia, who has developed an interest in him.
|Wikipédia|